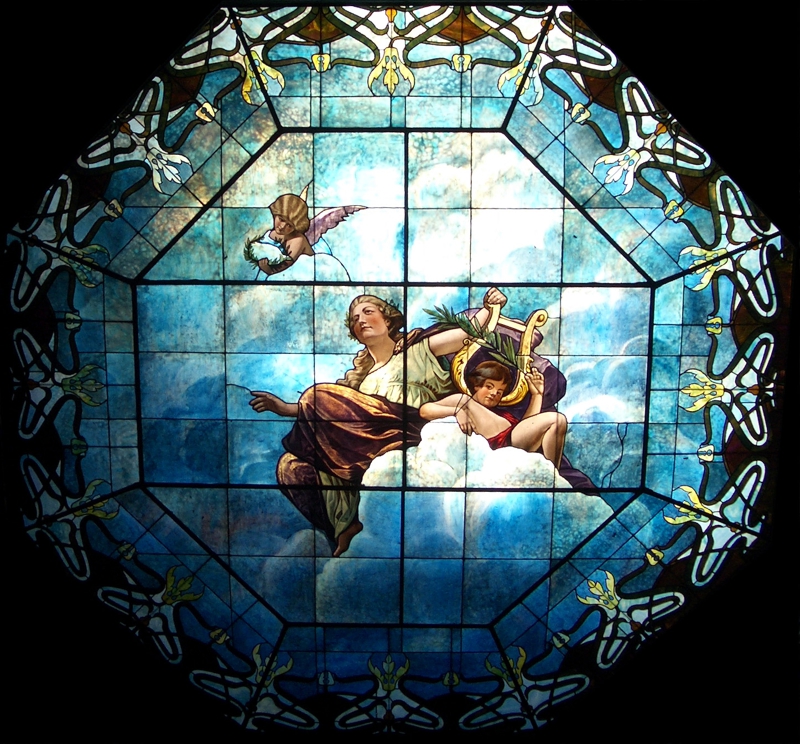 Mike Delva’s passion for his profession has made him acutely familiar with the pane of love.

“The glass has a life all its own,” says the man whose 18-year-old, four-person company, Denver Art Glass, is one of the leading creators, purveyors and restorers of stained-glass windows in the Denver area. “It’s not the same color in the morning as it is in the afternoon.”

“The right window,” he continues rhapsodically, “can just bring an unbelievable richness and sophistication in and just totally transform a room.”

“And no,” Delva says, perhaps anticipating his visitor’s next question, “we do not have any photographs of it.”

He does, however, have photographs of some of his other creations, including lovely floral motifs, vague geometric patterns, rainbows, balloon designs (“I don’t like those much, either”), even antique golfers in turn-of-the-century garb. Better than a photograph, though, is the lovely 5 1/2-by-4 1/2-foot medieval-themed window that Denver Art Glass has just completed for a client.

“Steve (Purdy, the company artist) spent quite a bit of time studying the musculature of horses so he’d get the detail right,” Delva says, looking proudly at the three knights on horseback. “And look over here – there are as many as four layers of paint,” he adds, indicating the ruby reds, sleek silvers and rich blues that create a lovely baroque image, right down to the chain-mail armor.
“This is not the norm by any means,” Delva explains, noting the $7,000 price tag. (Depending on how elaborate the design and the treatments – e.g., the degree of beveling – a window can cost $65 to $2,000 a square foot.)

Of course, $7,000 pales in comparison with $70,000. That’s what it cost the state to commission Creative Stained Glass to design, create and install a 600-square-foot window in the Colorado School of Mines’ Alderson Hall.

“It was a project for the Colorado Art in Public Places program,” CSG owner and designer Mike Shields explains. “The design is abstract, it represents flow.”

Size doesn’t always matter when it comes to stained glass.
Although Randy Leever of Boulder Stained Glass is proud of the 4-by-9-foot stained-glass window his company designed and installed at the Colorado State Capitol, he also is pleased to talk about the 4-by-2-foot carved glass transom of the vice-presidential seal he made for the door of the Washington, D.C., office of Al Gore.

“Designing, fabricating and installing a piece – that’s really satisfying,” he says. But there’s more to building a better stained-glass window for some firms. For instance, half of Delva’s business is derived from restoring them. And we’re not talking mortal-sized windows in homes. No, 90 percent of the restoration is on the formidable stained-glass windows that grace churches and municipal buildings.
Don’t confuse repair with restoration. The former is a short-term solution that involves fixing broken pieces. The latter is much more of a painstaking production.

“Restoration is trying to re-establish the window as close as possible to its original condition,” Delva says, explaining that the work goes beyond cleaning, repairing and replacing damaged pieces. A Restoration often has more to do with replacing the leading by which the pieces of glass are attached.

“Over the years, a window with external exposure is subject to wind pressure, solar heating, evening cooling, vibration from traffic and the effects of pollution,” Delva says. Expansion and contraction caused by heating and cooling are particularly tough on lead. In a church in Sterling, the elements so mercilessly bombarded a stained-glass window that “the lead was literally disintegrating,” Delva says. Deterioration can cause a window to lose its “ability to maintain its structural integrity,” he says. (Translation: The window can loosen in its frame, causing a bowing effect, or it can become cracked, or both.)

When this happens, Delva’s only option is to remove the window and take it to his studio, where it will be dismantled, re-leaded, re-puttied and repainted, to say nothing of assiduously cleaned.
Depending on the number of windows involved and the extent of damage and degradation, restoration can be a lengthy affair.
And sometimes unpleasant.

“Restoration can be dirty, nasty and toxic,” Leever says, explaining that when old lead oxidizes, the resultant white powder can become airborne, and “you definitely don’t want to breathe in that stuff.”
Although Leever has done restoration work for clients such as the Boulderado Hotel, “Unless it’s a project I feel strongly about and, frankly, can make some money on, I tend to want to stay away from restoration,” he says.

Delva, on the other hand, is more open to the prospect of restoration work. On and off for the past 12 years, the Denver Art Glass company has been cleaning and restoring the windows of the Temple Events Center in Denver, a former synagogue that boasts more than 50 elaborate stained-glass windows. Although Delva explains that funding delays have held up the project, he acknowledges: “I’m glad we’ve been able to spread it out. I’d go nuts if I had to do all those windows at once.”

Not that he isn’t used to tackling lengthy projects, like the Palm Room windows in the Governor’s Mansion or the stained-glass skylight four stories above the lobby of the Perrenoud Building condominiums at East 17th Avenue and Emerson Street.

This recently completed project took two months and wound up with a $20,000 price tag. But that’s small wonder considering that the nearly 100-year-old skylight was on its last legs structurally and was begrimed with nearly a century’s worth of dirt. Today, however, the glass (which is populated by cherubs, a celestial mother figure, a harp or two, ethereal blue sky and sunlit, flocculent clouds) isn’t restored so much as reborn.

“When the scaffolding was gone and I looked up, I couldn’t believe how bright the colors were and how wonderful it looked with all the gunk gone,” says building resident (and Rocky Mountain News art and architecture critic) Mary Voelz Chandler. “I stood there and thought, “Wow”‘

That may also have been the reaction of the bean counters at the Colorado legislature when they heard Delva’s estimate of the cost to restore two 70-year-old stained-glass windows at the Capitol: $11,550 each.

Although there was initial concern that an ammonia-based cleaning product had damaged the windows, Delva says, the real culprits are heat, cold and wind.

Not that improper cleaning products can’t be the bane of a pane. Before cleaning painted stained glass, make sure the paint was properly fired onto the glass in special kilns. If not, you could have what Delva calls “fugitive paint,” which is highly vulnerable to cleaning solution. In most cases, it’s better to use nonionized water and a soft cloth.

But even with a mosaic of colored, not painted, glass, avoid ammonia-based products, Delva advises. “The ammonia could affect the putty,” he says, which sits between the glass and the lead, providing waterproofing and structural support.

If cleaning, re-leading and replacing window putty can be putty in Delva’s hands, it wasn’t always that way. In the early 1970s, the Delva’s career track was supposed to lead to some niche in environmental biology. To add a little variety to his master’s-degree courses, he took a stained-glass class.
“It was just a whim, something that was totally unrelated to biology,” he says.

But the whim took hold. And when Delva became “fed up with the politics of graduate school,” his professional life careened in a new direction. And if Delva hasn’t looked back over the past quarter-century, who can blame him? For him, the future has always been as clear as glass.