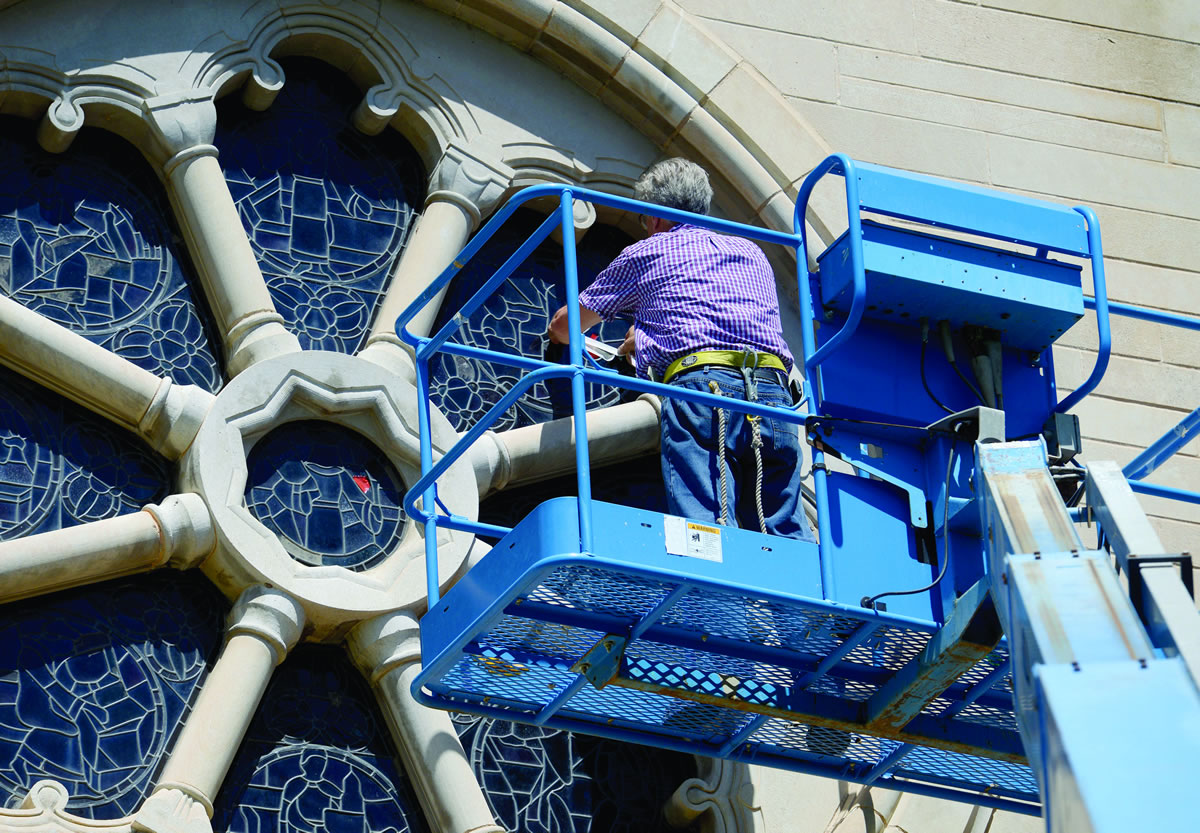 Facilities Crew Ensures Campus Buildings Preserve the Past, Prepare for the Future

After 140 years, the Colorado College campus barely shows its age — thanks largely to the staffers of CC’s Facilities Department. They’ve spent decades polishing CC’s buildings into historic gems that will function well for students, staff, and visitors for years to come. That’s why, as of mid-October, CC has 15 buildings on the State and National Register of Historic Places.

Dan Crossey ’74 is a Facilities Department stalwart. Officially, his title is “cabinetmaker,” which doesn’t begin to summarize his talents and passion for his work. In late September, he walked through the nearly completed Spencer Center renovation and paused to wipe an infinitesimal scattering of sawdust from a windowsill.

“This building was pretty much torn down to the dirt,” he says. “To be honest, there wasn’t much that was worth keeping.”

Crossey, who’s worked at CC since 1995, is the kind of craftsman who can say with a straight face: “That was kind of fun to do. There was a hundred years of paint and grunge.”

The renovation cost around $8 million; CC self-funded the project using Plant Reserve funds augmented by bequests from the estates of Betty Soucek ’44and Frederick Hastings ’44. Campus planner George Eckhardt says it’ll save money in the long run, thanks to the focus on sustainability.

“It’s hard to look beyond first costs when you do a renovation or new construction,” Eckhardt says. “But you have energy costs that are going up over time so when you’re trying to make decisions that will be looked at over 20 or 30 years, you look at which solution has the best return on investment over the life cycle. Anything you do to save energy is going to have a huge return over time.”

Just one example: Solar panels on the roof will meet 20 percent of the building’s electrical needs.

“It’s about sustainability and the welfare of our people. If you give them good facilities and good support, they’re happy and we’re happy,” Eckhardt says.

But, as Crossey points out, historical accuracy takes a back seat to ensuring safety. For instance, any “floating” stair landings must be eliminated to ensure that visually impaired people don’t smack face-first into them. Current standards also call for higher handrails to match the greater height of today’s bodies and handrail posts close enough to prevent a child falling through. Dangerous asbestos, common in construction decades ago, must be removed.

The final guiding principle is accessibility, following the Americans with Disabilities Act standards that include wheelchair ramps for building entrances. But that doesn’t mean sacrificing the building’s historical appearance. For instance, the ramp leading to Cossitt Hall’s entrance was constructed mostly of stone from the quarry that supplied the stone for the building, completed in 1914.

Eckhardt’s office in the Van Briggle Building has a bookshelf brimming with binders full of paperwork for each Colorado State Historical Fund grant project he’s worked on. Eckhardt, who has a master’s in mechanical engineering and 15 years in a steel mill to his credit, has worn multiple hats since he joined CC in 1983.

“I saw that a lot of things were kind of run-down, poorly maintained. I thought, ‘Wow, we have a lot we can do here, a lot of potential.’ I didn’t see it as anything bad, it just needed to be attended to.”

Back then, funding was scarce for major projects. Instead, problem areas underwent quick fixes, often leading to more problems down the road.

Crossey recalls a story he’s heard about the inevitable results of heavy rainstorms: “The janitors would gather up all the towels in Palmer Hall, because the roof would start leaking and they channeled water down the steps and out the door, just a stream. They couldn’t even fix the roofs.”

Eckhardt has learned — on the job — how to meet the requirements of the Colorado State Historical Fund (CSHF) and the U.S. Department of the Interior Historical Preservation Standards.

His paperwork includes national registration forms, basically nominations for buildings to be designated as historical. The form for the Dodge-Hamlin House, for instance, is 33 pages describing its history, landscaping, dimensions, previous owners, significance to the city and the school, even the style of the stucco finish.

“There probably isn’t any building that I haven’t had some impact on. I like the challenge, the variety, the ability to get involved administering the allocation of funds and directing work,” Eckhardt says.

CC’s first SHF grant partially paid for a survey to pinpoint the most urgent needs. The architectural firm which evaluated 97 campus structures found that 69 were historically significant.

Additional SHF grants, awarded from 1997 through 2002, helped repair Cutler Hall, the oldest building on campus. Built in 1880, the building was so decrepit that chunks fell off in strong winds.

The project posed some challenges, including replicating the finials atop the cupola, Crossey says.

“We said, ‘Where are we going to find an 8-inch-diameter ball?’ And somebody said, ‘How about a bowling ball?’ And it was perfect.”

Both men love what they do, despite the challenges. Crossey once had to tear out and rebuild the cabinets and wainscoting on the east wall of the current president’s house. Previous workers had power-washed the exterior walls to remove paint, but the water settled into the bricks, which oozed moisture to the interior.

“Black mold was flourishing behind the wallpaper,” he recalls. “The paneling and backs of the cabinets warped and buckled 1 to 3 inches out from the wall. That was a tough job.”

Eckhardt is proud of the way these projects have changed the mind-set on campus.

“Those old, beat-up buildings, the students were disrespectful of them,” he says. “Like pickaxes in the wall, hanging climbing gear and stuff like that. But once we started putting effort into preserving buildings and put up those plaques for the Register of Historic Places, the students took a whole different view and treated it more like their home.”

Neither would dream of working anywhere else, doing anything else.

“A college or a town, for that matter, without historic buildings is like a person without a family or a past,” Crossey says. “We don’t just work on buildings; we support the goals of CC.”